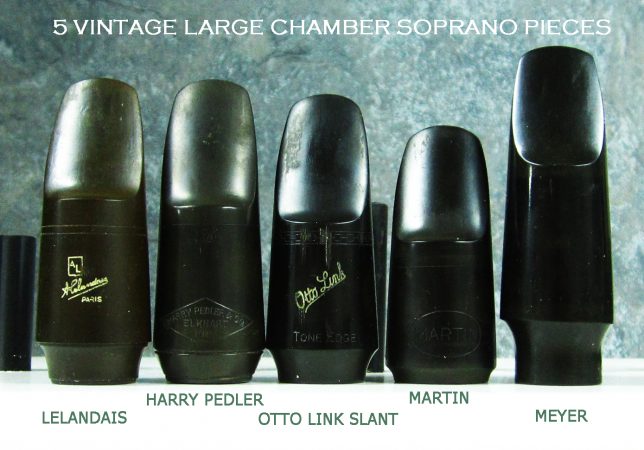 There’s a lot to know about large chamber soprano pieces.

Like all soprano mouthpieces, the tables need to be flat and the facing curve needs to be crisp. But then the fun begins with the chamber itself, its size and shape.

So, here’s a picture of 5 vintage large chamber soprano mouthpieces side by side. This picture alone should tell you something right away. Each of these pieces are very good players since I cleaned up the ubiquitous table and facing issues. That said, they are so different, one to the next, that calling them “large chamber” mouthpieces is not very useful.

Figure it out: if the internal volume of these pieces are more or less equal, which they are, then their chamber shapes must be drastically different to accommodate the obvious difference in external dimensions.And they are different.

So: why is that? Well, it’s because the shape of the chamber has way more to do with the sound than the  nomenclature of “large chamber”. We should be speaking about “deep chamber” or “wide chamber” or “low chamber” or high chamber”, and more.

This idea that the “throat” (the opening in the chamber just before the neck of the horn), which has become the ‘standard” for calling these pieces “large chamber”, is a controlling factor or even a significant factor in how pieces like these perform and sound, is a false one..

There’s a reason that the major mouthpiece makers of the past all stopped making large chamber soprano mouthpieces. The simple reason is they developed a superior design that played better and offered all the same potential for tone and response. And the new design was simpler to produce as well, besides being easier for most players to play. But that doesn’t lessen the beauty of these “large chamber” pieces in the least. It just reorients them in our thinking.

Pieces such as these and others make significantly different demands on a player. It’s not that they are harder to play but they require more from the player if they are to play in tune consistently.

In the case of these 5 pieces, we have the squat, wide Otto Link slant and the even squatter Martin. But we have the longer chamber of the Meyer, which is by default also narrower. Their sounds are different but, more importantly, their response and feel is very different.

Crude analogy, but, here it is anyway: if you try to blow up new balloons, you may notice that the longer, thinner ones require less force of air than the big rounder ones require. That is, in many ways, like the feel that one “large chamber” piece can have and another, with a different shaped chamber, will not have or will have much less of.

I see and play more soprano mouthpieces than anyone I know, and by “play”, I mean PLAY, not just toot. The things I’ve mentioned are not theories but things that I have discovered over a long period of time. Keep them in mind when you are dealing with any mouthpiece for soprano that is playing great for you or is fighting you in some way. The answers are usually right in the chamber itself.

Be sure to take a look and give a listen to the current large chamber soprano mouthpieces available on the SHOP VINTAGE page.

So okay, holy crap, this mouthpiece is pretty amazing. You are the undisputed soprano master. Opened up my high range quite a bit. Enjoying the sound and feel, and it’s working very much as you described. Game changer for me … END_OF_DOCUMENT_TOKEN_TO_BE_REPLACED

I just received the mouthpiece and it plays beautifully, extremely sensitive dynamic control, dark harmonic center with precise intonation. I’ve been playing for a few hours now and I would add that it really makes the palm keys sing! In … END_OF_DOCUMENT_TOKEN_TO_BE_REPLACED

Received the mouthpiece. Great! I love it! Thanks, it’s perfect.

I always thought that soprano mouthpieces were pretty much one and the same from piece to piece. I now know differently. Joe has made me a piece that makes it so easy to get to what I want to do … END_OF_DOCUMENT_TOKEN_TO_BE_REPLACED

Wonderful piece, deep, full, but still resonate. Love the Marcas. Got to spend a good 3—4 hours on it yesterday, and I began to lock into it. Nice!!